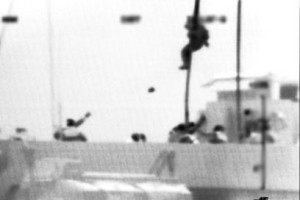 For the first time since deadly raid on Gaza-bound Turkish vessel in 2010, two Navy commandoes wounded on deck of Mavi Marmara recount moments of horror, clash with terrorists

“Damnit, I was hit by a live bullet.”

In the commotion around him, A. failed to notice the flash of the muzzle. Five or six people were standing above him, beating him up with anything they could get their hands on. It took him a few seconds to understand where the gaping hole in his stomach came from.

A few minutes earlier, safely hunched inside the IDF chopper transporting him and his comrades above the Mediterranean’s dark waters, A. was convinced that he was heading to yet another routine operation: A civilian vessel carrying some peace activists. Maybe he’ll encounter a few curses or some pushing and shoving; not something that a few bullets from his paintball gun won’t resolve.

However, when A. and fellow Navy commandoes landed on the Mavi Marmara’s deck, the above scenario shattered. And then, while sustaining the blows, A. felt a burning sensation piercing through his body. “At first, I didn’t get it,” he recounted this week for the first time. “I placed my hand on my stomach and didn’t quite understand what was going on. Five seconds later I again placed my hand there, and felt my entire finger sinking in. All of that was happening while the terrorists were not letting go and fighting me.”

And once you realized what hit you?

“I told myself: ‘Damnit, I was hit by a live bullet.’ I also got pissed off about it.”

Nearby, A.’s comrade, Y., was also sustaining a severe beating. “My head was bruised and my left arm was hurt, because they pulverized it with their clubs,” he recounted this week. “Then, at once, it happened. I switched my way of thinking – as they trained us to do – bent down to my calf, managed to pull out my handgun, and fired a bullet into the legs of each assailant.”

A. and Y. sustained the worst injuries among the Navy commandoes who landed on the Marmara that night. We can assume both have been to far more dangerous locations during their service than a “peace vessel” sailing not far from Israel’s shores. None of them imagined the operation was about to get messy, and that within a few hours their blurred black-and-white images will headline newscasts worldwide.

‘Fighting for my life’

Monday, May 31, 2010. 4 am. Despite Israel’s warnings, six vessels make their way from Turkey towards the Gaza Strip. The organizers, headed by Islamist group IHH, claim that they are carrying “humanitarian aid” and that the ships are transporting “peace activists” from all over the world. Israel, determined to maintain the Gaza blockade, dispatches IDF choppers carrying Navy commandoes towards the flotilla. Operation “Winds of Sky 7” gets a green light.

At first it looked like a walk in the park: Navy commandoes easily took over five of the six vessels. However, the sixth ship – the Mavi Marmara – with 700 people onboard, is about to turn into a military and diplomatic nightmare. The first to reach the deck was the squad commander, who was immediately hurt and neutralized. A. was the second man down the rope. He is a 23-year-old resident of northern Israel, whose mother also served in the elite unit.

“At first I didn’t understand what’s happening,” he said. “Just as I came down, five or six terrorists carrying crowbars, clubs, chairs and anything else they could fight with jumped at me. I sustained blows to my head and they also tried to choke me. While doing it, they also tried to lift me and throw me down to the lower deck.”

“When I realized what was going on, I also realized that I was fighting for my life; it was either I overcome them, or they’ll throw me into the sea,” he said.

So what did you do?

I fought with my fists and started to push them away. When I came down to the deck, I only held a paintball gun…so in the initial stage I only fought with my hands. This is what we were taught to do when we have no weapons.

But you had a handgun.

It was attached to my calf. I tried to reach it, but this takes time.

What was going through your mind at that time?

You’re fighting for your life. The struggle lasted some 30 seconds. They tried to throw me overboard, yet just when I managed to reach my handgun, I was hit with that bullet to the stomach.”

Bleeding on the floor

Meanwhile, Y. also landed on the deck. “As I was sliding down the rope, I saw a group of people fighting. I had no choice, as I couldn’t climb back up. So I kept sliding down and saw four or five terrorists waiting for me there, armed with clubs, metal pipes and chairs. I came down, and they immediate started to beat me up, focusing on my head. I was wearing a military helmet, but they got it off, shattered it and started to pulverize me with blows to the head. While doing it, they started pulling me towards the edge of the deck, in order to throw my overboard.”

Seconds after landing on the Marmara’s deck, his left arm was completely crushed and remained hanging from his shoulder. Y. managed to pull out his handgun with his other hand and fired at the legs of his assailants.

“At that moment, I spotted one of our soldiers on the other side of the deck, with two terrorists standing above him and beating him up; he was bleeding on the floor. So I fired at the two terrorists and brought them down.”

How did you know who’s a terrorist and who’s an innocent civilian?

“There was no problem identifying them. The terrorists wore orange life vests, protective vests, and gas masks. All of them were equipped with cold arms. This is not what innocent peace activists look like.”

By this time, A. also managed to pull out his handgun. “The moment the assailants saw that I was holding a gun and waving it, they got away. I then looked up and saw another terrorist with a handgun aiming at a member of my squad. At that moment I opened fire at him and finished him off. I went back and saw that the terrorists who were on top of me earlier were now fighting my comrades. I opened fire at another one who jeopardized another soldier and took him down.”

Meanwhile, fighting continued inside the vessel. A. suddenly remembered that he was hit by a bullet and was losing blood. “After two or three minutes, when I saw that things were calming down, I went to the paramedic and told him I was hit by a live bullet…to this day I joke with him about the fact he didn’t give me morphine, because he didn’t think I was hurting. In fact, I was suffering great pain. It really hurt.”

While A. was neutralized, Y. decided to continue fighting inside the vessel, despite his shattered arm. “I attached my arm to the vest with a belt, as simple as that, and continued to fight. At the moment, this was the last thing that bothered me…there were no feelings at that moment, no pain.”

“I saw that our second force, which arrived on the chopper behind us, was advancing towards the bridge, and I joined them. Only after it all ended, maybe 40 or 50 minutes later, I took the time to treat myself. Only after the fighting ended I told the paramedic: ‘Listen, my arm is broken.'”

‘I don’t want to be a soldier’

The clash on the Marmara lasted for less than an hour, but ended with grave results: Some 20 passengers were hurt, including nine fatalities. According to the Turkel Commission, which looked into the incident, all of them were “activists belonging to the IHH organization, armed with weapons that can cause death and intending to kill or gravely harm the soldiers.”

Meanwhile, 10 Navy commandoes were also wounded, including three who were seriously hurt: The squad commander, A., and Y.

“Given what went on there, we came out of it with a minimal injuries,” says A. “Every soldier who took part in this incident gave his whole. You have to understand: Our Navy unit is family. This explains the fact I’ve been serving in the IDF for five years now and don’t want to be discharged.”

So why don’t you pursue a military career?

“I don’t want to. I want to be a farmer or a machine engineer.”

Will you be traveling to Turkey anytime soon?