Palestinian officials are speaking the language of war at the same time that their security forces are acting strongly against anyone who might target Israelis. 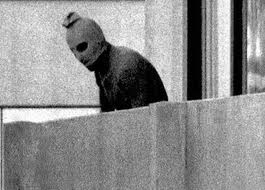 In the letter, Rajoub wrote that “sport is a bridge for love, unification and for spreading peace among the nations, and it must not be a cause for divisiveness and for the spreading of racism.”

Needless to say, Rajoub describes the despicable act of terror merely as an “act,” nothing more. It is unclear how Rajoub had succeeded in turning a moment of silence in the memory of athletes killed in an appalling manner by terrorists into an act of “spreading racism.”

In a phone call from London, Rajoub told me Thursday afternoon that the Israeli demand is an attempt to mix sports with politics. “Are we supposed to ask for a moment of silence on behalf of every Palestinian family you killed bombing Gaza? Or on behalf of a Palestinian athlete killed by Israeli fire?” he asked. “There are those in Israel who wish to exploit the stage for political gain,” Rajoub added.

As a reporter following the remarks of Palestinian officials for more than a few years, it is hard to say that Rajoub’s words surprised me. Still, they managed to anger me. I tried explaining that there exists a difference between a family killed by mistake during bombings and an act of terror aimed at civilians, but it didn’t impress him.

Rajoub is part of the Palestinian peace camp, an enthusiastic supporter of the two states solution. Maybe I am angered because these words are voiced by a Fatah official who supports a peace agreement with Israel. If it was a member of Hamas, his words would have been received with indifference.

This is a bigger problem, as Rajoub is not the exception. Palestinian Authority and Fatah officials are referring, again and again, to the terrorist Dalal Mughrabi as a hero, a freedom fighter. Mughrabi took part in the 1978 attack on Israel’s coast road (connecting Tel Aviv and Haifa), killing 37 Israelis, 12 of them children.

Over and over, the officials are including Lod, Ramle and Haifa as a part of the Palestinian land and are misleading their people that one day they will return to those cities as part of their right of return.

True, everyone are politicians. They don’t want to be perceived as if they are compromising, giving up, “gentle soul” lefties, etc.

Nevertheless, criticism is often heard against Netanyahu and the right, that they are not partners for peace. So what is the Israeli public to understand from remarks such as this?

This is an interesting process. While in the days of Yasser Arafat, the Palestinian Authority was talking with the Israelis in terms of peace but allowed violence to go wild, in recent years the trend was reversed: Palestinian officials are speaking the language of war at the same time that the Palestinian security forces are acting strongly against anyone who might target Israelis. The security cooperation is strictly kept and includes constant coordination between the two sides.

This honeymoon between security forces on both sides began in the summer of 2007. The question is how long the Palestinian Authority could stand the criticism over its cooperation with Israel.

Quite a lot of Israeli security officials are warning that without a political horizon, the Palestinian security forces would eventually collapse. This Israeli government, so it seems, is not extremely troubled by this scenario.