For a Packed Part of Jerusalem, Expansion Plans Have Built Mostly Outrage 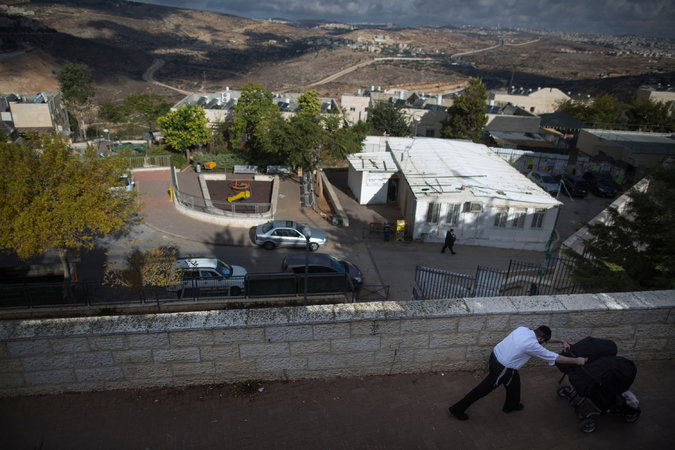 An ultra-Orthodox Jewish man in the neighborhood of Ramat Shlomo, where about 500 new apartments received an Israeli committee’s approval on Monday. Credit Uriel Sinai for The New York Times

JERUSALEM — Residents jokingly refer to “Lower Ramat Shlomo”: In the parking area beneath apartments, instead of cars, wood-veneer doors mark homes fashioned illegally to accommodate a bursting population. Elsewhere in the ultra-Orthodox Jewish neighborhood of East Jerusalem, courtyards and porches are enclosed by wood, glass, even burlap — every available space, it seems, transformed into makeshift shacks by a community whose growth has been stymied by the fraught politics of this contested city.

“It’s not too far from Delhi or Bombay,” Ezra Berger, the head of Ramat Shlomo’s Community Council, said with admitted exaggeration as he showed sidewalks dotted with racks of drying laundry. “It’s like a ticking time bomb in the neighborhood — it’s a social bomb, and it’s also a health bomb.”

Built two decades ago on land captured from Jordan by Israel in the 1967 war, Ramat Shlomo has become a prime symbol of Israel’s conflict with the Palestinians and, especially, its diplomatic confrontations with Washington and the rest of the world. On Monday, after an Israeli committee approved about 500 new apartments in Ramat Shlomo, the Obama administration condemned the measure — for at least the sixth time since expansion plans were unveiled during a 2010 visit to Jerusalem by Vice President Joseph R. Biden Jr. [see original article for map of building plan]

“It would be unfortunate at this sensitive time that after the unequivocal and unanimous position last week of the United States and others in the international community opposing construction in East Jerusalem, Israeli authorities are actively seeking to move these plans forward,” said Edgar Vasquez, a State Department spokesman. “We continue to engage at the highest levels with the Israeli government to make our position absolutely clear that we view settlement activity as illegitimate and that we unequivocally oppose unilateral steps that prejudge the future of Jerusalem.”

But for all the international outrage that Ramat Shlomo has engendered, not a single new home has been built there in a decade. Instead, the neighborhood is a case study of stalemate amid the broader struggle over the fate of Jerusalem, which both Israelis and Palestinians claim as their capital and ancestral heart.

Critics of Israeli settlement policy see every push forward as a provocation that further hampers the prospects for a two-state solution. Some also see Ramat Shlomo as a pawn in a political game, in which Prime Minister Benjamin Netanyahu of Israel announces building plans both as retaliation when he feels that Israel has been slighted and as a salve to pro-settlement forces. But they say he may be delaying the actual construction in order to contain the wrath of the United States, United Nations and European Union.

“The Israeli government is in some sort of a bind — it’s not able to change its policy on building, and it’s also not able to follow through,” said Aviv Tatarsky, a researcher at Ir Amim, an organization that opposes settlement expansion. “Building is happening in some places, but declarations are happening much more.”

Ramat Shlomo — one of a dozen large Jewish neighborhoods built on East Jerusalem land whose annexation by Israel has never been internationally recognized — was an empty hilltop before 1967, according to historical photos. Its 173 acres near Jerusalem’s northern boundary were expropriated from the adjacent Palestinian community of Shuafat — some residents still call it Shuafat Ridge.

Mr. Netanyahu and his allies maintain that building anywhere in Jerusalem is an Israeli right. They point out that the parameters outlined in 2000 by President Bill Clinton for a two-state solution, as well as two-state maps drawn since, presume that Ramat Shlomo and the other Jewish areas in Jerusalem would remain part of Israel, while Shuafat and other Arab areas would be part of a future Palestine. Unlike the even more contentious purchasing of properties by Jews inside Palestinian neighborhoods like Silwan, some argue, expanding Ramat Shlomo hardly changes the reality on the ground.

But Shuafat residents point out that the whole neighborhood is on land that once belonged to their families. Israel recently took 20 more acres to build a new road in the area, and Palestinians fear that the road will make it more difficult for them to access their olive trees. They, too, are constructing illegal dwellings to absorb growth, since only a handful of building permits have been granted in recent years.

“It’s clear that if you expand settlements, that means you reduce space for the Palestinian neighborhoods,” said Sami Ershid, a lawyer who represented 38 Shuafat families opposing the Ramat Shlomo expansion at a 2012 hearing. “You cannot import land and put it on the ground.”

Both Palestinians and Israelis place a premium on living close to where they were born, complicating the challenge of providing affordable housing in Jerusalem’s crowded precincts.

When 2,100 housing units were built in Ramat Shlomo in the 1990s by seven nonprofit groups serving large, poor Orthodox families, there was little public outcry. Several residents said in recent interviews that they did not realize that their new homes were over the Green Line, the pre-1967 boundary between Israel and Jordan.

Most said they moved for economic, not ideological, reasons. Yaakov and Shayny Pinsky said they paid $150,000 for a four-bedroom flat with a large yard, where they raised 12 children (“Lots of bunk beds,” Mr. Pinsky explained).

“We were in Jerusalem,” Mrs. Pinsky said. “We didn’t think there was anything wrong with it.”

Named for Rabbi Shlomo Zalman Auerbach, a yeshiva chief beloved across Orthodox sects who died in 1995, the neighborhood now has 42 large synagogues, according to Mr. Berger, including a red brick replica of 770 Eastern Parkway, the Brooklyn headquarters of the Chabad-Lubavitch movement. There is a small post office, but no bank. There are also remnants of a quarry where King Herod may have taken stones for the Second Temple more than 2,000 years ago.

Expansion plans, first discussed a decade ago, got stuck in the bureaucracy even before Mr. Biden arrived and raised objections.

Building in Jerusalem is a multistep process that can take more than two years under the simplest circumstances.

When Israel’s interior ministry announced plans for 1,600 new units to be built along Ramat Shlomo’s west and south during Mr. Biden’s visit in March 2010, the vice president called it “precisely the kind of step that undermines the trust we need right now.” In August 2011, the ministry gave the units “final approval,” and a State Department spokeswoman said “unilateral action of this kind works against our efforts to get folks back to the table.”

The so-called “Biden units,” reduced to 1,500, were approved again in December 2012 as part of Israel’s response to the United Nations General Assembly vote granting Palestine status as an observer state. And they were approved again in October 2013, after Palestinians who had served long terms in Israeli prisons were released amid American-brokered peace talks.

Tenders for 600 of the units were published in January, apparently as part of Mr. Netanyahu’s effort to offset domestic political fallout from another prisoner release. In June, yet another announcement was made about moving forward with the project, in retaliation for the Palestinians forming a new government based on a reconciliation pact with the militant Islamist Hamas movement.

Then last week, Mr. Netanyahu revived a plan that both Mr. Berger and Ir Amim say has been dormant since 2006, for about 600 units to be built on private land at the neighborhood’s northern tip, which the committee approved Monday with a reduction of about 100 units.

For the Pinskys, whose eight married children are scattered around Jerusalem and beyond, this is a dream they are not counting on coming true. “My kids would love to have a project that they could live closer to home,” Mr. Pinsky said. “One day it’s happening and it’s electrifying, the next day there’s a blackout.”

For Mohsen Abu Khdeir, a Shuafat chiropractor, it is a nightmare. “Families are going to stand in front of the bulldozers,” he warned.

A version of this article appears in print on November 4, 2014, on page A6 of the New York edition with the headline: For a Packed Part of Jerusalem, Expansion Plans Have Built Mostly Outrage. Order Reprints|Today’s Paper|Subscribe