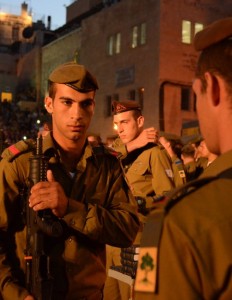 Brothers Milad and Muhammad Atrash, Arab Muslims from the Galilee, volunteered to defend their country by enlisting in the IDF

Over the next few minutes, the Golani Brigade’s soldiers who drafted in March of this year will swear allegiance to the State of Israel and commit to do all they can to protect it. Muhammad, an Arab Muslim resident of the Galilee village of Dabburiya, is one of them. Like his friends, he’s excited for the ceremony to begin.

The ceremony begins. As the brigade commander finishes his speech, the soldiers quickly run to their commanders, their families and their friends who have come to show their support and encouragement.

When Pvt. Muhammad Atrash’s turn comes, he doesn’t look for anyone in the audience. “My parents wanted to come, but I convinced them not to,” he explains. “Jerusalem is very far from our home, we don’t have a car and it’s an hour-long drive.”

The commander tells Muhammad to stand in front of him. Instead of the Hebrew Bible, the young soldier picks up a Quran, decorated with Gold ornaments. He swears his allegiance to the State of Israel, holding the book tightly and smiling.

“I’m mostly trying to feel the experience, because It’s my first time ever in Jerusalem,” he says.

In his brother’s footsteps

For Muhammad, 18, this is an important step in his unique relationship with the Israel Defense Forces – which began a year and a half ago, when his older brother, Milad, 19, chose to enlist.

“While still in high school I asked my family, ‘Why don’t we, the Muslims, enlist?’” Milad recalls. “‘Why do the Jews, the Druze and the Bedouins enlist, while we don’t?’ They explained to me that Jews serve because it’s their country, that the Druze [community] had signed agreements with the IDF and that we have a lot of Islamic movements that oppose military service in the IDF.”

Milad’s response? “I told them I don’t care about that. I want to join the army to protect my village, my country,” he says.

Seeing another side of Israel

Five months later, Milad started his military service and arrived at basic training. “Because I didn’t know anything about the army, I packed a bag for 4 months!” he says with a smile. “After four days my commander told me I was going back home for the weekend.”

For Milad, enlisting in the IDF meant spending time in parts of Israel with which he was unfamiliar. “I didn’t know how to get home,” he says of that first weekend. “I left the base at 8 a.m. and only got home at 10 p.m. I had never been so far from my village.”

Later, Milad became the soldier assigned to the integration of minorities in the local northern recruitment center, a position that allowed him to provide assistance to soldiers facing the same challenges as he had. In two weeks, he will start his officers’ training course.

It seems that Milad passed his sense of commitment to Israel’s defense on to his younger brother. When Muhammad graduated high school, he considered immediately pursuing his academic studies – until his older brother convinced him that the army was the best solution for him.

“After a few conversations with Milad, I understood that this was what I wanted: to enlist, to contribute to my country,” he explains.

Muhammad faced some particular challenges at the beginning of his service, in part because he did not speak much Hebrew. “In the first two weeks, I didn’t understand the commands at all [or] what the rest of soldiers were speaking about,” he recalls. “I had already learned some writing in Hebrew, so I would write to my army friends whatever I wanted to say. At first, it was very hard, but slowly I learned it all.”

Muhammad says that during his service he has never had to face any case of racism, nor has his older brother. However, the brothers say that their military service was not always well received back home in their home village.

“People in the village talk behind our backs,” explains Milad. “And when our mother washes our uniforms we make sure she does it inside the house so that our uniform won’t be stolen.”

“Despite it all, I go back to the village with my uniform on,” says Muhammad without hesitation. “So far, I haven’t gotten any comments, and even if people stare I don’t notice. I’m fine with it.”

Some of the Atrash brothers’ friends also objected to their military service. “I no longer have friends from my village,” Milad says. “All of my friends decided to end our friendship, but that’s all right. I’m making some new friends here, in the army. They also stayed away from Muhammad because he’s in the army.” Muhammad agrees.

“At first my mom was afraid of [my] enlisting in the IDF,” Milad continues, “but she saw it makes me happy, so she is happy, too. Now she tells my brothers to enlist. I’m trying to convince my cousins to enlist,” he smiles.

Muhammad makes it clear that he would encourage others from his background to serve in the IDF. “It doesn’t matter where they serve – contribution is the most important thing. For me, for example, it doesn’t matter if I serve in Judea and Samaria or on the Gaza border and will have to confront Muslims from the other side of the fence. We are guarding our country, we have to protect it and it doesn’t matter who’s the other side is – Arabs or not, Muslims or not. In the end, everyone protects his or her family.”