Why the army and the Shin Bet are proving humiliatingly incapable of putting a stop to the plague of ‘price tag’ Jewish extremist attacks on Muslim, Christian and Jewish targets 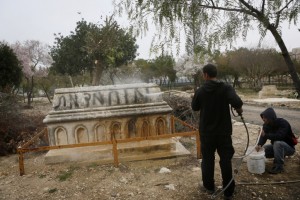 Jerusalem municipality workers clean anti-muslim graffitti reading “Muhammed Dead” which was spray-painted on muslim graves at a cemetery in the Independence Park in Jerusalem. February 14, 2013. (Photo by Miriam Alster/FLASH90)

Several hours after a “price tag” hate crime was committed on Tuesday, this time in the dovish Arab village of Abu Ghosh, the army officer in charge of the IDF’s Central Command described the majority of these types of offenses as terror activities, and said that defense forces were easily able to pinpoint the perpetrators of most attacks but incapable of amassing the sort of evidence necessary to take them to trial.

“Those people [about whom] we have intelligence that they are involved in terror activities, like burning mosques, they do create dangers to stability on the ground, but unfortunately we do not have enough proof to put them behind bars in court,” said Maj. Gen. Nitzan Alon at a lecture at the Jerusalem Center for Public Affairs.

Instead, Alon said, despite “a lot of criticism from the people from the settlements,” he has issued dozens of administrative orders banning individuals from the West Bank, a measure that he contended had cut the number of mosque burnings from nearly a dozen in 2011 to two or three during the past year, but perhaps has also led to a spate of attacks on other targets in and around Jerusalem and in the villages of the Jordan Valley and the Galilee.

The term “price tag” attack came into existence in the summer of 2008 after settlers who had been evacuated from the outpost of Adei Ad in the Nablus region retaliated against villagers from the village of Burin, cutting telephone wires and vandalizing cars.

Since 2011, there have been upwards of 100 such attacks. Targets have included Palestinian villages, primarily in the northern West Bank; the IDF’s Ephraim Brigade headquarters, where vehicles were vandalized and the brigade commander, Col. Ran Cahana, was struck by a rock in December 2011; churches and mosques, including the Latrun Monastery in central Israel, where in September 2012 vandals torched the wooden door to the sanctuary and scrawled the words “Jesus is a monkey” above the entrance; and several attacks aimed at left-leaning Jews, including members of Women of the Wall and Peace Now.

The Jerusalem apartment of Hagit Ofran, the director of Peace Now’s settlement watch, has been vandalized three times and the graffiti left in the stairwell and on her car has explicitly threatened her with death.

Over the past month and a half attackers have torched cars and scrawled racist graffiti in the Israeli cities of Afula, Safed, Jerusalem, Um al-Qutuf (in Wadi Ara), the Church of the Dormition in Jerusalem, Jaffa, Sheikh Jarrah, and now the village of Abu-Ghosh.

The quantity of the attacks and the increased range of the attackers led the security cabinet on Sunday to label the perpetrators as belonging to an unlawful organization, a classification that enables the security forces to use additional measures to apprehend the suspects. However, the government stopped short of formally labeling the attacks as acts of terrorism.

Prime Minister Benjamin Netanyahu on Tuesday said the Abu Ghosh attack “goes against Judaism’s precepts and against the values of our people and our state.”

He promised to act “with full force” against the perpetrators of the crimes and hailed the new classification as the tool necessary to address the problem.

Maj. Gen. Alon was less hopeful. He said of the cabinet decision that he was “not sure that it’s very important,” and explained why the mighty defense establishment, which has produced no major indictments, has been stymied by what are believed to be ragtag groups of teenage youths behind the attacks, some still shy of their bar mitzvahs.

“I will give you an example,” he said in response to a question from The Times of Israel, “of not ‘price tag’ but what I see as a clear terror attack.” Alon described the August 2012 incident in which several youths hurled Molotov cocktails at an easily recognizable Palestinian taxi, injuring six members of the same family from the village of Nahalin.

“We knew after a short inquiry who these guys are,” Alon said of the three alleged perpetrators, residents of the settlement of Bat Ayin, aged 12-and-a-half and 12. “We arrest them. They were getting [questioned in a] Shin Bet and police inquiry. They shut up at the inquiry.”

He described the suspects as “very well prepared for such an inquiry,” and said they refused to cooperate.

Nonetheless, he admitted, “there was not enough evidence to put them on trial.”

Alon described many of the perpetrators of price tag attacks as “quite clever” and said they were very knowledgeable regarding the legal limitations placed on Israeli authorities in terms of questioning minors and of the modus operandi of the security services. “They are very aware of our intelligence abilities. They do not use cellphones. Do not talk. Two people can launch together a terror activity and the day after they won’t talk about it anymore. So it is quite hard to get the evidence.”

There also has been within the Shin Bet, an organization focused primarily on combating Palestinian terror, a longstanding aversion to tackling Jewish crime and terror. “For many officers in the Shin Bet, being sent to the Jewish brigade is like going into exile,” a Shin Bet source told Channel 2′s Uvda program in May.

A former commander of the Shin Bet, Carmi Gillon, who headed the agency at the time of the Rabin assassination, said it was “more comfortable” pursuing Arab terrorists and noted, of Israeli prime ministers in general, that, “they don’t want to know what you’re doing in that [Jewish terror] domain.”

In fact, Gillon admitted that the Jewish brigade’s work is often so overlooked at the Shin Bet itself that the first time he, as commander of the Shin Bet, heard the codename Champagne, the Shin Bet’s moniker for Avishai Raviv — the agent who had been in contact with Yigal Amir before he assassinated prime minister Yitzhak Rabin in 1995 — “was from the mouth of Channel 2 commentator Amnon Abromovitz” shortly after the murder.

The Shin Bet refused a request from The Times of Israel to elaborate on the difficulties it faces in bringing Jewish vandals, arsonists and terrorists to trial.

A former commander of the interrogations division at the organization, however, shed some light on the matter. “Talk to me when you want to talk about Arabs,” he told me, effectively illustrating the widespread reluctance. 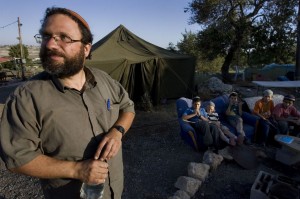 Additionally, the Uvda program shined a light on the activities of one man, Noam Federman, a resident of the settlement of Kiryat Arba, who has allegedly devoted efforts to aiding the perpetrators of the so-called price tag attacks.

The author of a pamphlet called Know Your Rights, which instructs suspects on how to behave during a Shin Bet interrogation, Federman also realized that the kryptonite of a covert organization is the light of day. He has instructed his followers to record every conversation with a Shin Bet official and to make the recordings public, the TV program reported. He can point to the houses of informants and he has organized protests outside the homes of Jewish brigade commanders.

D, a former Jewish Brigade brigade commander and himself a resident of one of the West Bank settlements, came under such pressure several years ago that then-Shin Bet commander Avi Dichter spent a Shabbat at the officer’s house and spoke with the community. Weeks later, however, the man, whose identity is classified by law, was attacked outside his home, and his pregnant wife lightly injured. Dichter eventually transferred him to a different position.

“We did it to D and we did it to A [D’s successor as commander of the Jewish Brigade],” Federman said in the Uvda report. “Those who pursue us, will be pursued by us.”