As long as in the heart, within,
A Jewish soul still yearns,
And onward, towards the ends of the east,
An eye still gazes toward Zion;

Our hope is not yet lost,
The hope of two thousand years,
To be a free people in our land,
The land of Zion and Jerusalem.

Romanian oxen and a chronic alcoholic are not the likeliest progenitors of the Israeli national anthem. But that’s “Hatikva” for you.

The globetrotting Galician poet who wrote it died over a century ago from drink, but his words live on despite numerous attempts to oust them for more socialist, divine or nonpartisan verse. As for the oxen, more on them later.

Hatikva was one of many candidates to become the anthem of the Jewish state, and no fewer than 12 songs were suggested as its replacement over the years. Its current form is the product of multiple redactions, and its tune — perhaps the song’s most important aspect — is the product of trial and error attempts to put its words to music.

Naftali Herz Imber, a Galician poet who immigrated to Ottoman Palestine, penned and published the poem “Our Hope” — “Tikvatenu” — in 1886. Its nine romantic stanzas evoked familiar Biblical scenes and reiterated a hope of a national return to Israel, “that only with the very last Jew” disappears. It was an immediate hit among the Jewish pioneers in pre-state Palestine.

Tel Aviv schoolteacher Doctor I. L. Metman Hacohen altered Imber’s lyrics in 1905, making a reference to “the ancient hope” more specific: “the two-millennia-old hope.” “To return to the land of our fathers / to the city where David camped” became “To be a free nation in our land / the land of Zion and Jerusalem.” 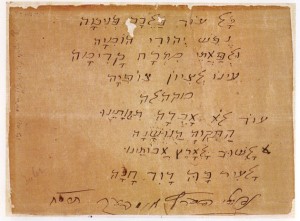 Although Metman Hacohen’s amendments took hold in Palestine, Imber’s verses remained the standard among Diaspora Jews for at least two generations more. A BBC recording of Bergen-Belsen concentration camp survivors shortly after their liberation in 1945, and American Jazz singer (The Jazz Singer, in fact) Al Jolson’s rendition of the anthem in 1948, both feature the original lyrics.

In its early years, several melodies for Hatikva emerged. Leon Igli, a pioneer of the new settlement of Rishon Lezion, made one unsuccessful attempt to harness Imber’s lyrics in song. Another tune adapted “Die Wacht am Rhine,” a patriotic German anthem popularized during the 1870 Franco-Prussian War, but its martial, Teutonic tones fit neither the meter nor the spirit of Hatikva.

Then, in 1888, Samuel Cohen composed a melody based on a Romanian folk song which “fit Hatikva like a glove,” Israeli musicologist Dr. Natan Shahar told The Times of Israel.

Cohen likely adapted his tune from a nostalgic Romanian ditty called “Carul cu boi,” which translates as “Cart with Oxen.” This melody, in turn, was a modification of a 17th century Italian composition by Gasparo Zanetti called “La Mantovana.” (La Mantovana was also modified, a few years before Cohen, by Czech composer Bedrich Smetana in his piece “Die Moldau,” whose central theme also bears striking similarity to Hatikva’s melody.)

Variants on La Mantovana’s theme proliferated throughout Eastern Europe at the time, Shahar explained, and its familiarity to Eastern European immigrants helped promulgate Cohen’s melody. It was simple and familiar; new immigrants had only to learn the lyrics.

Tellingly, irresistibly, the one-octave jump on the word “not” in the verse “our hope is not yet lost” (Od Lo Avda Tikvatenu), Shahar noted, “causes the singer’s heart to rise,” in an upwelling of emotion in the poem’s key phrase.

By 1903, when the Sixth Zionist Congress convened in Basel, Switzerland and voted on the establishment of a Jewish homeland in Uganda, Zionist leaders closed the plenary by spontaneously singing Hatikva. It wasn’t until 1933, however, that Hatikva was ratified as the official anthem of the Zionist movement.

Despite its popularity, Hatikva had virulent detractors. “Commoners loved Hatikva, but leaders and musicians started to fight it,” Yedioth Ahronoth writer Eliahu Cohen noted in a 1997 article. “[Zionist leader Menachem] Ussishkin complained of its musical weakness, and [Jewish composer] Joel Engel argued that it was ‘a loathsome hymn.’”

Moshe Halevi, director of a Tel Aviv theater troupe, implored future prime minister David Ben-Gurion in 1947 to choose a different song to be the national anthem. Religious organizations living in Mandate Palestine suggested Psalm 126, which begins “When the Lord brought back the captives to Zion.”

Ben-Gurion, however, was so protective of Hatikva that when a conductor seemingly altered the song’s tune during a state ceremony in 1958, he “demanded severe reprimand of the person responsible because ‘musicians supposedly improvising anthems in bad taste was insulting and injurious,’” Haaretz quoted the late prime minister saying in a 2004 article.

“After the fact it was clarified that it wasn’t improvisation, rather the orchestra couldn’t see the conductor because of horrible lighting,” the newspaper reported.

The Knesset finally, officially ratified Hatikva as the anthem in November 2004, and the only reason why it passed without controversy, said Shahar, was because most of the country was distracted by Palestinian leader Yasser Arafat’s death the same day. Ultra-Orthodox Jews continue to object to Hatikva’s omission of God, and Arab citizens of Israel disagree with its overt Jewish character and omission of their own identity.

The Balad party lampooned Hatikva and right-wing politicians in a 2013 campaign ad with animated political characters singing and dancing to an Arabized pop version. The ad features a caricatured Yisrael Beytenu party leader Avigdor Liberman saying that he will propose a law under which Arab citizens would only be eligible to receive their national ID cards if they showed allegiance to the state by singing Hatikva.

That latest controversy underlines the anthem’s at once beloved and berated nature and lack of harmonious consensus surrounding Hatikva. For the optimists, as ever, “our hope is not yet lost.”