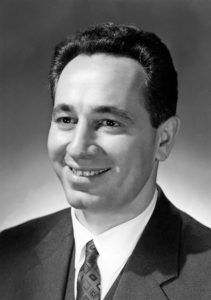 Shimon Peres was born August 21, 1923 in Vishneva in White Russia (then Poland) near Volozhin, to Yitzhak and Sara Persky. In 1931 his father, Yitzhak Persky, emigrated to Palestine. His family followed two years later.  Peres was initially enrolled in the Balfour “High School,” and then the Balfour “Elementary School”  in  Tel-Aviv, followed by the Geula High School (“Gymnasium”) where he became a member of the Hanoar Haoved youth movement. At the end of ninth grade he quit school and moved to  the Ben-Shemen agricultural school and youth village. Peres joined the  Haganah underground in 1941. He trained at Kibbutz Geva and was then sent to join Kibbutz Alumot in the lower Galilee. He married Sonya Gelman in 1945 and they had two daughters and a son.

At Alumoth, Peres was recruited by Levi Eshkol to work as an organizer for the Hanoar Haoved youth movement in Tel-Aviv. He was subsequently elected  secretary-general of Hanoar Haoved, the Histradrut labor federation’s youth movement, and was a delegate in 1946 to the 22nd World Zionist Congress. At the congress he met David Ben-Gurion and backed his program, which favored forming a Jewish state. In 1947, Ben-Gurion selected Peres and several others to search for officer talent for the Hagnanah. In May 1947, Ben-Gurion drafted Peres into the Haganah high command, where he was initially in charge of manpower and later became involved in arms procurement and production.

Peres served as chief of the naval department in 1948, was sent to the United States in 1950 on an arms-procurement mission (as well as to complete his education), and was director-general of the ministry from 1953-1959. Peres was instrumental in establishing the indigenous Israeli defense industries, including and especially the Avionics industries, and he is also known as the father of the Israeli hi-tech industries. In his tenure at the Ministry of Defense he built an alliance with France that secured a source of arms, and helped to enlist Britain and France in the Suez campaign of 1956. He also embarked on a program to develop nuclear power and nuclear weapons for Israel, convincing the French to help Israel build a secret nuclear reactor beginning about 1957.

Peres was a close associate of Ben-Gurion and rose in the Mapai Party “young guard.” He was first elected to the Knesset (parliament) in 1959. He then served as deputy defense minister. Leaving Mapai with Ben-Gurion in 1965 over the Lavon affair, he helped form the breakaway Rafi Party and was returned to the Knesset in 1965. Three years later he returned to Mapai, forming the new “Alignment Party”  From 1969, Peres served as minister of immigrant absorption and minister-without-portfolio until August 1970, when he was became minister of transport and communication. In the aftermath of the Yom Kippur War (1973) Peres briefly served as minister of information as part of a cabinet reshuffle. During this period, Peres was part of the right-wing of the Labor or Alignment party as it was variously known, and actively encouraged settlement of the occupied West Bank.

In 1974, Peres lost a contest for party leadership to Yitzhak Rabin by 298 votes to 254. The Knesset endorsed the Rabin government in June, with Peres as Minister of defense. However, relations between Rabin and Peres remained strained for many years. In his memoirs, Rabin famously wrote that Peres is an “incorrigible subversive.”  Peres was actively involved in the separation of forces agreements with Syria and Egypt following the Yom Kippur War. He also administered the occupied  West Bank.

Peres replaced Rabin as Israel Labor Party head after it was revealed that Rabin’s wife had $3,000 in an illegal bank account in the United States. He was unable to lead the Labor party to victory however, and in 1977 the party lost power for the first time since the State of Israel was founded in 1948. Peres remained Labor party chairman until 1992. In 1978, he was elected vice-president of the Socialist International and remained in that post for many years.

Peres led the Labor party in their unsuccessful bid to unseat Menahem Begin in 1981. Peres’s chances were hurt by the IAF strike on the Iraqi nuclear reactor, and by racist remarks made by an Israeli comedian who supports the Labor part. Beginning in 1981, Israel suffered a period of uncontrolled and disastrous inflation as well as the war in Lebanon initiated by Ariel Sharon. Following the 1984 elections, a unity government was formed, with Peres and Yitzhak Shamir serving alternately as Prime Ministers. Peres was in large part responsible for an economic plan which brought inflation down from over 700% annually to about 15% in a very brief time. Peres was also involved in the “Irangate” affair, in which Israel cooperated with Oliver North and others to exchange US hostages held by Iranian-backed Lebanese terror groups in return for US military equipment that would be sold through Israel.

Peres tried to bring down the Shamir government in a parliamentary coup, but failed. Elections in 1988 led to a second unity government, where Peres served as Finance Minister.

In 1992 Peres lost party leadership to Yitzhak Rabin, who led the Labor party to victory in the 1992 elections. Peres was appointed foreign minister in the new Labor cabinet. Together with his assistant, Yossi Beilin, Peres was responsible for the negotiations that brought about the Oslo Accords. Peres and Rabin had reconciled their differences. In 1994 the Nobel Peace Prize was awarded to Shimon Peres, Yitzhak Rabin, and Yasser Arafat in recognition of their role in the Oslo peace process.

On November 4, 1995, Israeli Prime Minister Yitzhak Rabin was assassinated by Yigal Amir, minutes after he and Peres had stood side by side on a podium at a giant peace rally in the main square of Tel Aviv, now called Rabin square. Peres became prime minister, vowing to continue the peace negotiations and overseeing the  Oslo Interim Agreement  (Oslo II). In February 1996, Peres called for new elections, hoping that they would renew his mandate for peace. Polls showed an overwhelming majority for the Labor party in the wake of the assassination of Yitzhak Rabin. However, several bus bombings, and a suicide bombing in Dizengoff square in Tel Aviv helped quench the enthusiasm for peace and drove Jewish voters to the opposition Likud party. Arab voters were disaffected by the bloody operation Grapes of Wrath undertaken by the Peres government in Lebanon. Peres refused to campaign actively and left administration of the campaign to Haim Ramon, who relied on the polls and did little, instead of pursuing an aggressive campaign stressing the heritage of Rabin. In a debate with challenger Benjamin Netanyahu, Peres gave a lackluster performance. Peres lost the elections by a narrow margin. He subsequently founded the Peres Peace Foundation to further joint economic ventures that would foster peace.

In May 1997 Peres retired from his position as party head. Party leadership was taken over by Ehud Barak, who became Prime Minister in the elections of May 1999. Peres was proposed for the post of President of Israel, but lost the election in the Israeli Knesset to Moshe Katsav. However, after Barak lost the elections in 2000 to Ariel Sharon, he retired from politics, and Peres again became head of the Israel Labor Party. Peres served as foreign minister in the unity government of Ariel Sharon until Labor left the government prior to the elections of 2003, and again was deputy prime-minister in the unity government of Ariel Sharon in 2005. In November of 2005 Peres was defeated in an election for Labor Party Secretary by Amir Peretz.

Subsequently Shimon Peres transferred his allegiance to Ariel Sharon and the Kadima Party but did not immediately leave the Labor party. Following the disgrace of former president Moshe Katsav, Peres was elected President of Israel.