I   know, I know, I keep saying this blog is dormant, but apparently it isn’t fully   dead.
Anyone who deals with the Israel-Palestine conflict will probably  have come across the nasty four-map series purporting to show how Israel is   eliminating Palestine step by step. Recently some fellow in the NY area hired  space on local billboards to expose them to commuters. I contacted him and asked   if he’d be willing to listen to a critique; when he said he would I sent him the  following analysis. You can see his brief response – and mine – at the   end.

According to what I’ve read on   Mondoweiss, you seem to be of the opinion that the series of four maps showing   the disappearing Palestinian presence in what was once Mandatory Palestine are   factually accurate. I suggest we take a closer look. 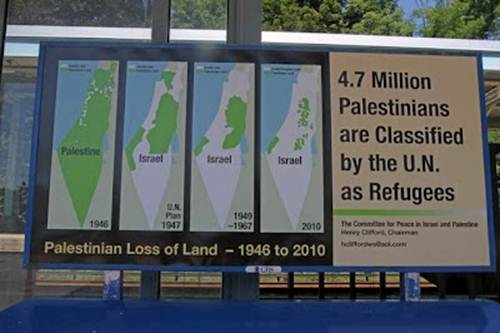 There are various problems with the series, the most obvious being that it compares   apples with oranges and also with screwdrivers, meaning that the different maps  present different data-sets. Some of the data-sets themselves are inaccurate.

Judging by the picture above,  your version of the maps is even more problematic than some of the other versions which are out there. I’ll relate to your version as presented on Mondoweiss.

First,   the map from 1946. Even standing alone without the series, it’s misleading in   that it contains two distinct types of information. The outline is of the   territory controlled by the British, commonly known as Palestine. Being a map of  a political entity, however, the whole thing should be the same color, green in   this case, since the entire territory was ruled by the British, the white parts  and the green. If one wished to show privately owned land under the sovereignty   of the British according to ethnic identity, the green would have been replaced   by a hodgepodge of colors. Some of the land was owned by Jews, some by Arabs   (today we would call them Palestinians), some by Arab absentee landlords of   other nationalities (Lebanese, Syrians, Egyptians and so on), some by European   churches – Catholic Protestant, Greek Orthodox, Russian Orthodox and others, and   finally, the largest section by far would have been land registered by no-one   and thus belonging to the government, i.e the British.

As far   as I can see, your version has omitted the Jewish ownership of property in   Jerusalem (where there was a majority of Jews), and in various pockets such as   the Etzion Block, Neve Yaacov, settlements on the Dead Sea, Hebron, Safed,   Naharia and its hinterland, Kfar Darom in Gaza, and so on. But the main problem   with this map isn’t its omissions of Jewish property, but rather the implication   that any land not owned by Jews was “Palestine”. Not true. If it’s land   ownership you’re trying to depict then most of the territory was owned by the   British government; if it’s political sovereignty then the entire area was   British.

The   second map drops the issue of land ownership, and the series never returns to   it. This map is a reasonably accurate depiction of the partition plan adopted by   the United Nations on November 29th 1947, with one glaring   omission: the Jerusalem-Bethlehem area, which was very clearly not allocated to   either side, but designated as a Corpus Separandum. I emphasize:   Jerusalem and Bethlehem. So the cartographer has allocated to a   notional Palestine a very important piece of territory which it never   had.

Of   course, this map never depicted a reality. At the time it was rejected by all   the Arab states which had a vote, and also by the local Arabs themselves who did   not generally call themselves Palestinians at the time, but we can agree to call   them that now. I’m not going to get into the question of who foiled the UN   partition plan, but I think we can agree that all sides played their roles; the   Jewish Yishuv, Husseini’s Palestinian forces, Kaukji’s forces, and the Egyptian,   Jordanian, Syrian, Iraqi and Lebanese forces which participated in fighting in   territory which had previously been under British rule.

The   third map (1949-1967) is misleading in its own way. It depicts Israel in white,   and two other un-named territories in uniform green, the same green the first   two maps implied had been Palestinian territory. Of course, this does not   conform to the historical reality. The Gaza section was controlled by Egypt, not   the Palestinians, and rightfully should be defined as Egyptian-occupied Gaza.   The larger green section was controlled by Jordan. Jordan annexed it and gave   its population Jordanian citizenship, so I don’t know if it was legally occupied   or not: if so, it’s status was probably similar to its status under Israeli rule   after 1967: occupied, with settlers from the occupying country. If it wasn’t   occupied, then it was part of Jordan. (That’s the source of the name “West Bank:   the western half of Jordan). Either way, it can’t be depicted as   Palestine.

You’ll   also note that this map shies away from dealing with private ownership, which   was the theme of the first map. Had it shown private ownership it would have had   to note that some of the territory inside Israel was owned by Palestinians, of   course, but that no land inside Jordan was accepted as being owned by Jews, even   though in some places their ownership had never been rescinded in anything that   might resemble due process.

Finally, the fourth map. For   the first time in the series, there is now a type of Palestinian rule – in all   of Gaza, and on the West Bank. Let’s set aside the distinction between Hamas   rule in Gaza and PA rule on the West Bank. Less explicable is the cartographer’s   decision to pretend that the Palestinian writ runs only in Area A, with nary any   mention of the larger Area B sections. As far as I understand the history, this   map doesn’t show a rump area of Palestinian rule, but on the contrary, it shows   the emergence, for the first time ever, of a new entity, of and for   Palestinians. Not a disappearing Palestine, but an emerging   one!

I   suppose you may say I’m quibbling, and that in a territory which had a minority   of Jews 150 years ago, there has emerged a state of foreigners which has   thwarted the emergence of a state of the original population. This, of course,   is true. The tragedy of the Israeli-Palestinian conflict is that both sides are   right, and both have legitimate claims on the same tiny piece of land. Most of   us think that the only way to resolve the conflict is for each side to reconcile   itself to the loss of important parts of the territory so that the other side   will have room for their national state. As to why this hasn’t yet happened, you   and I probably disagree. We may also not agree on the details of how the   partition ought to be done. Yet those are legitimate issues which need to be   resolved in negotiations.

The   maps you’ve published, on the other hand, tell a different story: that Israel is   purposefully pushing out the Palestinians so as to have the entire land for   itself. This is not true, which explains why in order to make the claim the maps   need to be so sloppy with the facts.

Finally, a note on projection.   I never cease to be surprised by Americans, Canadians, Australians or New   Zealanders who feel they have a moral right to condemn the Jews for migrating to   another land and pushing aside the natives. Surely the Jewish case for moving to   the land of their history is vastly better than the case of Europeans moving to   continents they had no history in. Over time, however, I’ve begun to notice that   such critics of the Jews assume, perhaps subconsciously, that the behavior of   the Jews must by necessity follow the pattern of their own forebears: total   dismissal of their common humanity with the natives they’re pushing aside,   followed by near-total dispossession. This, however, is a complex of the   critics, and has very little to do with the Jews.

In any   format the bottom line is irrefutable – the Palestinian people have lost most of   their homeland.

My   response (and the end of our conversation)

And   equally irrefutable: the Jews finally have it back.

Now,   either they find a way to partition it, or one side will be without. Partition   seems to me vastly better, but the possibility that the Jews need to do without   is unacceptable.

One Response to “The maps of disappearing Palestine (Yaakov Lozowick)”