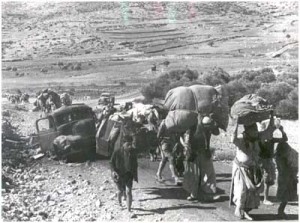 A softer touch on the Nakba
A surprising new study shows that much of the Israeli mainstream rejects the Zionist narrative that there was no expulsion of Palestinians in 1948.
By Akiva Eldar
Published 04:46 24.01.12
http://www.haaretz.com/print-edition/features/a-softer-touch-on-the-nakba-1.408917

Security and border issues are a familiar safety valve in efforts to break impasses in talks between Israel and the Palestinians. These issues are thought to be relatively solvable compared to the problem of Palestinian refugees and the fate of East Jerusalem.

Politicians from all Zionist parties refuse to acknowledge a right of return for the Palestinian refugees. They vehemently reject a more modest demand by the Palestinian side – that Israel accept partial responsibility for the Palestinian exodus of 1948. In Israel, the Nakba Law seeks to remove this stain from the collective Jewish-Israeli consciousness.

Politicians think it’s clear that the evasion of any responsibility for the Palestinian catastrophe appeals to most Israelis. Those who are willing to accept a critical approach holding that many Palestinians did not flee but were expelled are classified, in the best case, as New Historians. In the worst case, they’re called post-Zionists.

A major study by Rafi Nets-Zehngut of Hebrew University’s Leonard Davis Institute shows that more of the Israeli mainstream than previously thought has adopted the critical approach on 1948. Nets-Zehngut contends that this trend preceded the advent of New Historians like Tom Segev and Benny Morris by several years. The study (Nets-Zehngut’s doctoral thesis ) is based on roughly a hundred interviews and more than a thousand publications released over 56 years by the research community, veterans of the 1948 war, media outlets, NGOs and state agencies (including the Education Ministry and the Israel Defense Forces ).

The same is true in about a third of books written by veterans of the 1948 battles. A survey of “Zionist” memoirs published by 1948 veterans between 1949 and 2004 shows that many writers – for instance, Mula Cohen, Nahum Golan and Moshe Carmel – who formerly expressed a strictly Zionist narrative began to develop the critical narrative toward the end of the 1970s. A similar transformation can be seen among scholarly researchers like Netanel Lorch.

Zehngut’s study shows that significant critical research on the Palestinian exodus was undertaken by Jewish scholars outside Israel in the 1950s, three decades before the emergence of the New Historians. In effect, this early use of the critical narrative led to the declassification of archival materials, the sources that were then used in books by Segev, Morris and others.

The study refutes the widespread claim that until the 1980s the Jewish-Israeli media were entirely beholden to the Zionist narrative. The paper shows that the vast majority of studies recognized that Israel had expelled Palestinians in 1948.

The Education Ministry comes around

Also, in the 1980s, the materials analyzed in Zehngut’s research dealt significantly with the expulsion of Palestinians from villages during the 1967 Six-Day War. The study argues that while the IDF and other state agencies have yet to alter their Zionist view on the Palestinian exodus in 1948, all history textbooks authorized by the Education Ministry since 2000 have replaced the old Zionist narrative with the critical approach.

This is a ground-breaking finding on a change in Israel’s official collective memory. In effect, it’s a rejection of the Zionist narrative that “there was no expulsion in 1948.”

The willingness of key Jewish-Israeli institutions to alter their attitudes on such an important and sensitive issue casts a positive light on Israeli society. It’s a sign of maturity.

A survey by Tel Aviv University researchers in 2008 established that just under half of Israel’s Jewish citizens are willing to abandon the narrative that “the Palestinians fled.” The survey found that those who use the critical approach tend to view the Palestinians more positively. They also tend to be more supportive of peace agreements and vote for center-left parties. So it’s no surprise that the political right wants to erase the Nakba from the collective memory.