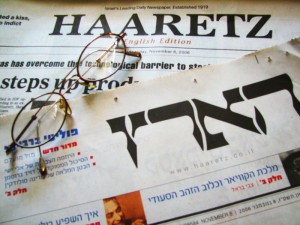 Israel must separate religion from politics

As an ultra-Orthodox man, I’m about to write some very strong things. I can’t help but write them, though, having reached the conclusion that it’s time for radical change.

Regretfully, I have to focus on the downside rather than the upside. Just as the occupation corrupts – as even its supporters will admit – so does politics corrupt religion. The mix of politics and religion in this country has created an endless cycle of moral turpitude and fraternal hatred. The religious establishment corrupts the fabric of the state, while the state corrupts the fabric of religion.

I don’t believe anyone has to pay for my beliefs. It’s not ethical that the secular public finances yeshiva students and the high birth rate among the ultra-Orthodox. There is nothing more infuriating to secular Israelis than to be spit in the face after they’ve given the ultra-Orthodox a generous sum of money. The ultra-Orthodox oppose the values of a secular society – Zionism, creativity, army conscription, sexual equality and more. However, they have no qualms about demanding and receiving money from this society, thereby intensifying public animosity toward them.

Distorted thought processes are not part of Jewish halakha. They originate in distorted interpretations that primarily result from the repugnant connections made between politics, the establishment and religion. American Jews would not dare block streets and harm policemen because a shopping mall was open on Shabbat. In the United States, rabbis would never dream of issuing a manifesto prohibiting Jews from renting apartments to Gentiles.

The time has come to say “enough”: enough to the religious parties; enough to their disgraceful self-centered preoccupation with budgets, as they ignore the rest of the country and the world; enough to the moral and aesthetic corruption of religion; enough to forcing laws down the throat of a public that does not believe in them.

Sometimes it seems the Haredim are motivated by a sense of victimization. This is what defines them and their right to exist, as though topping the agenda of President Barack Obama and the Supreme Court was the question of how to eradicate religious Judaism. Is it any wonder that anti-Semitism and Jew-hatred are flourishing? What would we ourselves think of a condescending religious sect, focused on itself that considers itself a light onto others but sows controversy and isolation?

Every person, Jew or Gentile, must be allowed to live according to his beliefs, with equal rights, out of genuine recognition of the human rights given to all those created in the image of God. One thing is clear: There is no worse combination than religion and politics.

The writer is a lecturer on Jewish law and served in the past as the head of the office of Israel’s chief rabbi.