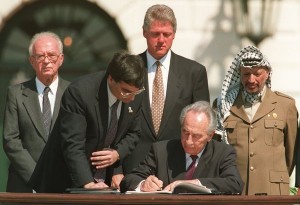 TEL AVIV — In May 1993, I was the first Israeli to begin formal negotiations with the Palestine Liberation Organization, which resulted in the Oslo peace accords signed later in 1993 and Oslo II in 1995.

With a perspective of 20 years, the critical achievement of the process was to put an end to the maximalist scenarios of a greater Israel or a greater Palestine, “from the sea to the Jordan.” From Oslo on, it became clear that the land would ultimately have to be shared by two states.

On the other hand, Oslo failed to meet the Israeli and Palestinian expectation of resolving their bitter conflict, primarily due to the election in 1996 of an anti-Oslo government in Israel led by Benjamin Netanyahu, and also Yasser Arafat’s failure to combat Palestinian terror and extremism. Nevertheless, after 20 years we can and should assess the lessons of the Oslo experience for the current peace process.

The Oslo accords were the most that the leaders of Israel and the Palestinians were capable of achieving without outside assistance and intervention. To this day, leaders of the two nations are unable to put forth the difficult compromises that are necessary to resolve all the permanent-status issues, because if they did, they would not survive politically.

So one conclusion is that without active U.S. diplomacy — mediation, not facilitation — no agreement can be reached.

Innovative, forceful U.S. diplomacy, led by Secretary of State John Kerry, has to open the negotiations by advancing bridging proposals — initially on the issues of borders and settlements, and later on the identity-related issues of Jerusalem and refugees.

The border must be resolved on the basis of the 1967 lines, with mutually agreed and parallel land swaps, and with Jerusalem as a shared capital. Otherwise a two-state solution is not feasible. Kerry should not underestimate the creative abilities of both sides to waste time on futile discussions, and must engage them on the essential issues.

Oslo also proved that even with the overwhelming authority over security that Israel reserved for itself, it was still not able to prevent Palestinian violence and terrorism. So for peace talks to be successful, a comprehensive security plan should be put forth by American generals who take Israel’s security interests very much to heart.

The proposal should include securing borders (including the Jordan valley), intelligence gathering, regional anti-terrorism and the deployment of international forces such as NATO. Such a plan should be negotiated not by politicians but by military leaders of Israel, Palestine, Jordan and the United States.

In parallel, given the diverse threats to Israel from a volatile Middle East, the United States and Israel should negotiate a defense pact guaranteeing Israel’s qualitative military advantage and security.

The future Palestinian state cannot develop a modern, prosperous economy, with transparent and accountable state institutions, on its own.

In the Oslo process, an international donor-mechanism was established to assist the Palestinian public sector, but the Palestinian economy was severely burdened by restrictive Israeli security measures.

This issue must become a prime concern in today’s peace process. Economic and business professionals should be involved. It is important for American and European businesses to invest in the Palestinian private sector, as well as to encourage development in the field of high technology, with a focus on Palestinian youth.

A critical element in future peacemaking must be the regional context — an issue that did not receive sufficient attention in the past. The Palestinians must be encouraged and supported by the Arab League in the concessions they will have to make.

As for Israel, the resolution of the conflict with the Palestinians must mean a fundamentally new relationship with the Arab world. Israel and the United States must insist that in return for Israeli territorial concessions in a permanent-status agreement, all Arab countries will establish full diplomatic and normal relations with the Jewish state. The Saudi peace initiative is a good basis for this.

The main lesson to be learned from Oslo is that for the peace process to be successful, it must be inclusive, not elitist. It must be a peace by the people, for the people. Arab and Jewish societies need to interact and cooperate and seek reconciliation. People-to-people relations should be added as a sixth permanent-status core issue on the negotiation table.

The vast majority of Israelis and Palestinians are young; the young on social networks have become the political barometers of Arab and Israeli society, and therefore must be placed at the core of the peace-building process emanating from a formal agreement.

The one thing that Oslo and a future agreement will have in common is that they are the right moral choice, aiming at ending Israeli occupation and Arab rejection.

Uri Savir is director-general of the Peres Center for Peace, in Tel Aviv-Jaffa. From 1993 to 1996 he was Israel’s chief negotiator of the Oslo Accords.

A version of this op-ed appears in print on August 30, 2013, in The International Herald Tribune.